Little Shop of Horrors at the Aux Dog Theatre

Some duos work perfectly, some don't. One happy duo is the Enchanted Rose Theatre and the Aux Dog Theatre who collaborated to produce the musical classic, "Little Shop of Horrors." Originally based on the black and white film by Roger Corman, the black comedy musical version is set in Skid Row during the early 1960's, featuring the perfect duo of doowop sound and campy comedy along side the imperfect duo of a man and his hungry, flesh eating plant. 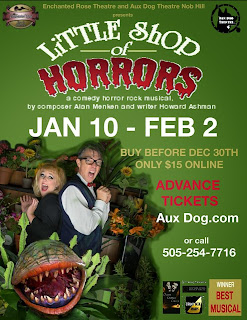 Tim MacAlpine plays Seymour, our lovable loser, the orphan from Skid Row with few prospects. Yet everything begins to change for Seymour after the eclipse when a strange plant appears, whom he lovingly names "Audrey 2" after his coworker and object of his unrequited affection. MacAlpine maintains Seymour's quirkiness and balances out the character's nerdiness with naivete, finding the lovable and courageous aspects that Seymour can also be.

Jessica Osbourne plays Audrey, his tawdry love interest, and expands on her comedic talents last seen in "Boeing, Boeing" by adding her vocal abilities in this musical. However, Osbourne is an actor first. I was sitting close enough to see the tear that fell during her solo number, "Somewhere That's Green." If you weren't close enough, you might not have seen it because Osbourne (lucky girl) doesn't do the ugly cry or choke up, and by finding Audrey's innate vulnerability, she keeps her from being a simple dumb blonde stereotype. We might find Audrey's dreams tacky, but she thinks they're sublime and that's why we care about what happens to her.

Click HERE to listen to Tim, Jessica and Gene talk about their roles

Audrey's abusive boyfriend, Orin, the sadistic Skid Row dentist, is a quirky comic role requiring an actor who's willing to play broad humor and yet remain believable. Bryan Lambe throws himself into the bizarreness of the leather clad, nitrous oxide huffing motorcyclist fully, delivering our villain. Orin is just one of Lambe's roles in this show, who shifts from character to character often, but it is the dentist who allows him to showcase his own growing comedic talents. 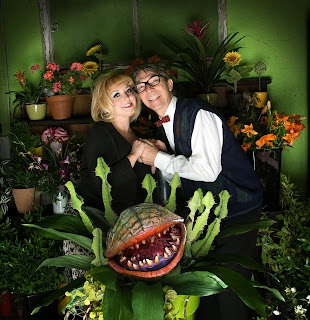 As Audrey 2's popularity grows, so does business for Mushnik, played by Phil Shortell, the Skid Row florist and Seymour's employer. Audrey 2's carnivorous appetite is growing also, as we discover her appetite for blood which Seymour alone can no longer fulfill. The puppetry of the Audrey 2 was superbly done, both in presentation of the puppet itself in its various stages of maturity, but even more so due to the comic duo of Michelle Gammill, the human puppeteer, and Gene Corbin, the deepset bass voice of Audrey 2. Requiring an ability to coordinate on an almost intuitive level, the two bring our plant to life, and Gammill's full body performance is quite convincing and commendable in its unabashedness.

Not to be forgotten are the trio Crystal (Hannah Guzman), Chiffon (Sandra Williams) and Ronnette (Klarisa Thornton) who interact in scenes but also act as the occasional Greek chorus, narrating events. With strong solo moments for each voice, the girls add to many scenes and numbers such as "Dentist!" The joy of the Aux Dog's intimate theatre is it allows the natural, unamplied (with the obvious exception of Audrey 2) voices to shine through, as well as the live music that they feature here, which is always to be enjoyed.

Directed by Vernon Poitras, with choreography by Edye Allen, the theatre sold out every show for the first weekend, and this perennially popular musical is bound to keep selling out so advance tickets are recommended. Visit the Aux Dog Theatre's website at auxdog.com/ to buy tickets online, or call their box office at 505.254.7716. And, click on Enchanted Rose Theatre for more information about their company's works as well.
Posted by Alissa Hall at 7:45 AM