Theatre is about taking chances, and if anyone understood that it was Phineas Taylor Barnum, a man who had a long career before he ever got involved with a circus and a guy named James Bailey. Musical Theatre Southwest took something of a chance by offering this show, Barnum, during December, as it doesn't fit in to the typical Christmas-y theatre options the public might expect. 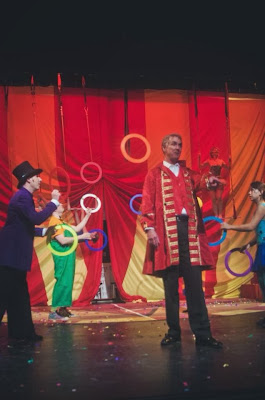 In the striving to find a family friendly show, a show whose rights are available to regional theatres, and something that's different than what fellow companies are also playing, other shows come to the forefront, which may partially explain this choice during the holiday season. Before the show began, the circus atmosphere was encouraged as red noses were handed out to the audience (and worn by some!), and the character Charity Barnum begins onstage, knitting quietly, for the half hour that the house is open but the show has yet to begin.

With book by Mark Bramble and set in 1835 to 1880, the story of P.T. Barnum (played by Erick Seelinger) unfolds, beginning with his touring acts such as Joice Heth, the "160 year old woman." Rarely leaving the stage, Seelinger's ability to maintain a strong voice in the many numbers that he must perform in this show is commendable. Also worth mentioning was Stephanie Burch's ability to sell a number, even behind a slightly frightening old age mask, which came next in Joice's number, "Thank God I'm Old." However, the pacing of the show begins to slow down afterwards and the songs, written by Cy Coleman and Michael Stewart, have a tendency to last a verse (or two) longer than the action of the scene provides. The dynamic between Charity "Chairy" Barnum, the sensible suffragist played by Wendy Barker, and her husband she calls "Taylor," the lover of all things bright and bombastic, is explored (and explored, and explored) in "The Colors of My Life."

Click HERE to listen to Erich, Claire, Wendy and Zane talk about the show 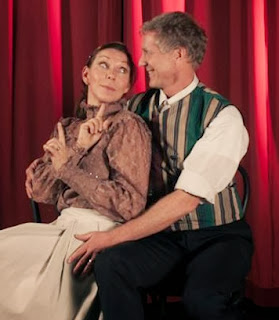 Knowing the importance of the razzle dazzle, the scenes between Chairy and Taylor are interspersed with circus moments that act as transitions, and songs such as "One Brick at a Time," as Barnum builds the American Museum. With performers balancing on balls, juggling, twirling ribbons, spinning plates, cracking whips, stilt walking and tumbling about throughout the show, it helps to pick up the inherent and persistent pacing issues. Kelly O'Keefe steps in as General Tom Thumb in "Bigger Isn't Better" but his character's cameo, while entertaining, does little to advance the storyline.

After a fire destroys the American Museum, Barnum's next big idea is to find and sign Jenny Lind, the noted European soprano renamed "the Swedish Nightingale," to tour America. Requiring a truly coloratura voice, Claire Seelinger brings her formidable operatic training and gives this role a moment of true artistic brightness in "Jenny Lind Obligatto." I looked up obligatto. It refers to a prominent countermelody, often played or sung above the principal theme, and being essential or integral to the piece as a whole. This conveys so much more in one word than the song Jenny sings next, "Love Makes Such Fools Of Us All," which suffers from being placed immediately after her stronger obligatto moment just prior. 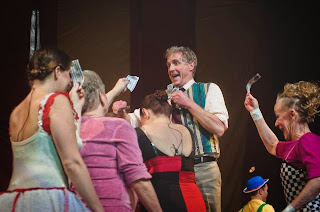 The conflict of a supposed attraction between Barnum and Lind lasts only the length of the intermission before being hastily resolved at the top of act two, so that the story can advance to include Barnum's political career that followed next. Stephanie Burch returns in the second act as the Blues Singer in "Black and White," and yet again revives the pace of the show, while being expertly flanked by dancers Larry Aguilar and Michael Maldonado.
While the political ambitions for mayor, then U.S. Senate, unite Charity and Taylor, they just as quickly dissolve as Barnum realizes he has been had in "The Prince of Humbug." At Chairy's unexpected death, Barnum finds himself alone and uncertain. Enter James Bailey, played by Zane Barker, and Barnum comes alive as he makes plans to enlarge the one ring circus to three rings. 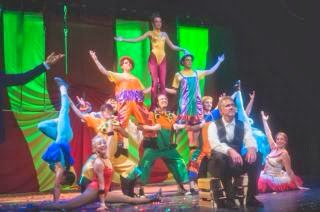 Dual husband and wife teams -- the Seelingers and the Barkers, along with the two young Barker children making their way onstage for the show as well -- bring some family charm to the cast which does read to the audience. And, the actors as a whole gave a tremendous amount of themselves learning how to bring the circus to life with skills that few had prior to casting. But the brokenness of the show's disjointed plot line and sluggish pace held them back as well.

Musical Theatre Southwest's next production is "Into the Woods," playing in at the MTS Center for the Arts in April 2014, and information on the entire season, tickets, auditions, and more can be found at www.musicaltheatresw.com.
Posted by Alissa Hall at 2:44 PM