Most of my entries are reviews, but this time I'm sharing instead a behind-the-scenes preview edition for a fundraiser show endearingly titled "The Mary Lopez Love Fest" (which I'm participating in as well!) happening this Sunday, June 30. There are two shows to catch, at 3:00 and 4:30, over at the North 4th Art Center, tickets are only $5 and 100% of the ticket sales' proceeds are going directly to the recipient, Mary Lopez herself, now in her second year of cancer treatment.

Mary is a long time student of Amaya, a local bellydancer whose career is legendary not only in the Southwest, but nationally and internationally. Seeing the need, Amaya stepped forward to help Mary directly by organizing this event, lining up the dancers from studios all around Albuquerque and promoting it through her classes, as well as her many theater and dance contacts.

Click HERE for Amaya's stories of bellydancing for the European circus


Dancers are often considered competitive and even mean spirited, but this is one example of how our local arts community is actually a force that comes together to support one of its own. Dancers and studio owners from Farfesha Belly Dance as well as Isalang Belly Dance are also volunteering to perform for the fundraiser, along with Amaya and her students.

And yes, it's true! For the first time in over a decade, I will be performing a solo that I choreographed for the 4:30 show, a bellydance/contemporary fusion number, and will also be performing in a group number, the classic "Amayaguena," in both shows with many of Amaya's other students.

You can check the Facebook Events page and the VSA arts website for June to find out more about tickets, showtimes and location. I hope to see you there!
Posted by Alissa Hall at 8:18 AM No comments: 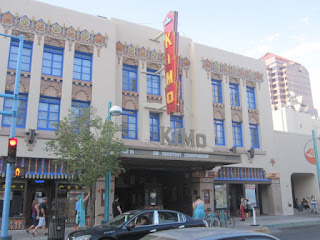 Watching poets being treated like rock stars for 3 solid hours -- complete with roadies, screaming fans, photo ops and girls wanting autographs -- was quite delightful. And inspirational!

The Southwest Shootout is part of a regional competition for slam poetry -- where words mashup with performance art -- but for this slam newbie it was tremendous fun. By luck, I was chosen as one of five audience judges for the first round of competition, the individuals round. 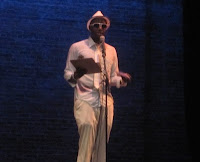 Even if you're not judging, you're still participating in an interactive show like this, where the audience is encouraged to voice their opinions to the judges, and to the poets, by clapping, cheering, snapping, grunting, hissing and yes, booing (booing the judges scores only, never the poets...kinda like "Idol"). With a "Rocky Horror" like audience participation, slam poetry is accredited as being invented by Marc Smith ("So what?!") in 1984 at an open mic night. Damien Flores and Hakim Bellamy, Albuquerque's first poet laureate, were the emcees for the event last Saturday at the Kimo Theatre.

Click HERE to listen to poets Hakim, Desiree and Melissa talk about performing 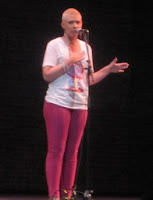 Poets from states all around our region traveled to compete, and in a group of a dozen, the winner of the individual challenge round was Desiree Dallagiacomo. Her work, "Factory Defect," about her father's schizophrenic emotional disconnection spoke in bleak images, counting the number of pills that would keep him alive, functioning.

Desiree returned again, performing in the group round as well, representing her troupe The Revengers, based out of New Orleans. "I like being alone / It's just / I hate leaving," she exclaimed, and the crowd responded enthusiastically. 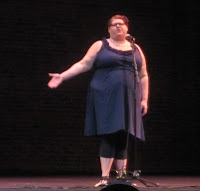 Another exceptional poet of the evening was Melissa May Dunn, who traveled from out of state as well to compete at the event. Melissa's work spoke to me deeply, and I found myself holding back sobs during her individuals round competition, where she spoke of the teasing words of children, words that not only weren't forgotten in childhood, but have become emblazoned into the legacy of work. Melissa also returned to perform solo for her troupe, the Iron Vaginas, in the group competition round, performing another piece I loved, "10 Commandments from one who has walked away from religion."

For more slam poetry events, check out www.abqslams.org to get inspired, use your words, and proclaim your truths from behind the microphone... or to cheer on those who are willing to bare their souls for the mike in return.
Posted by Alissa Hall at 7:48 AM No comments: