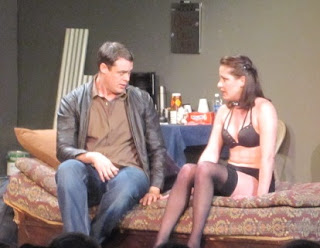 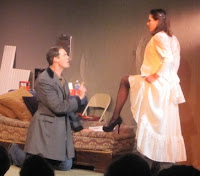 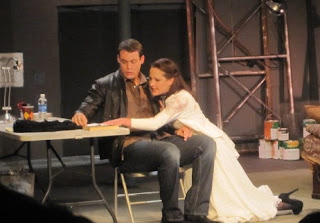 Remember that movie The Birdcage with Robin Williams and Nathan Lane? Most everyone does, but did you know the musical comedy "La Cage aux Folles" was the movie's original inspiration?

Like the screenplay, the stage comedy currently running at the Albuquerque Little Theatre revolves around a gay couple, Georges and Albin, whose son Jean-Michel wishes to marry Anne, daughter of a political conservative who seeks to shut down drag clubs. One invitation to dinner later, and the complications ensue.

Ron Bronitsky's Georges finds himself trapped between his love for his child, as well as his devotion to his partner, Albin, whom he is asking to disguise his true self, or simply to disappear. As Albin, Dean Eldon Squibb must find the nuances between love and betrayal by the family he loves, while still being the great performer Zaza that the people demand.

As their foils, the conservative Dindons' bombastic rigidity, played by Rick Huff and Carolyn Hogan, allows the preposterousness of hiding who you are to be seen. Throughout the show, the message of being true to one's self is emphasized in both script and song, despite the paradox we each live when we disguise ourselves by putting costumes over our authentic personality. As true in metaphysics as it is in theater, "We are who we are, and who we are is an illusion."

Click HERE to listen to La Cage cast members talk about their performances
Not to be forgotten are Les Cagelles, the nightclub's showgirls, an energetic ensemble of talent led by Jonte Culpepper, as the ferocious Hannah, and her team of fabulosity, James Camacho, Joey Grider, Andrew Melendez, Ty Shoemake and Roan Velasco. Energizing the pace of the show, the Cagelles' costumes and choreography dazzle and delight.

Directed by Henry Avery, with choreography by Larry Aguilar and musical direction by HollyBeth and William Williams, the expert guidance behind the scenes shines through in each actors' performance before the audience, who gladly ended the night cheering on their feet.

Currently in their 2nd week and closing on March 24th, that means you still have time to catch this show, as well as a bonus Thursday performance on March 14. The show is rated PG-13. Check www.albuquerquelittletheatre.org for prices and online ticket sales.
Posted by Alissa Hall at 12:49 PM No comments: