Water symbolizes the element of emotion in metaphysics, so it's no surprise I love this book and not just because it's written by Kathryn Ravenwood, someone I love, but because it takes a courageous soul to say, "Give thanks! Give back! Speak gratitude!" especially when that gratitude isn't for a person, but for a thing, an element. 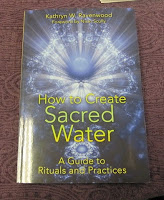 Expressing gratitude for water, a resource that literally keeps you alive & healthy every day, and yet is often wasted, misused, polluted and forgotten... that is the essence of Ravenwood's book. While describing her own autobiographical journey with Spirit, Kathryn shares her foibles & triumphs while answering that internal call, and how it manifested as a loving force, meant to clarify and heal the waters of our world using intention and prayers. Her doubts, her questions, her rebellion and her grace while listening to that spiritual calling echo moments I see within myself, making her writing immediate and revelatory. 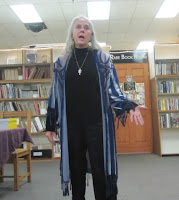 It's often a circuitous path, our spiritual journey, and finding your own answers is encouraged with Kathryn's book, with several chapters describing meditational journeys that assist the reader to find their own unique relationship to water. Working with the elements is a familiar practice to many, but Kathryn's focus is different, giving direction to "assisting Gaia" by keeping a water altar, and offering back the water in an effort to restore balance, energetically as well as physically. 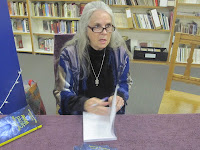 Santa Fe locals can find Kathryn Ravenwood appearing today at The Ark Bookstore to sign and read from her book, How to Create Sacred Water from 2-4 pm but if you're not nearby, be sure to follow the amazon link to grab a copy for yourself... 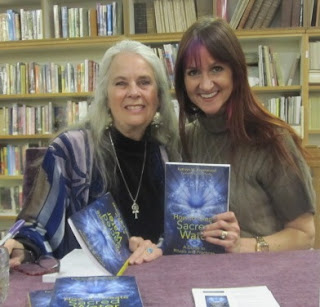 Posted by Alissa Hall at 9:51 AM No comments: 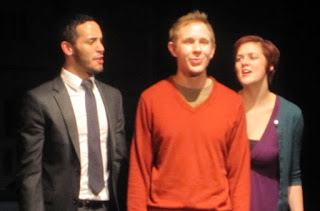 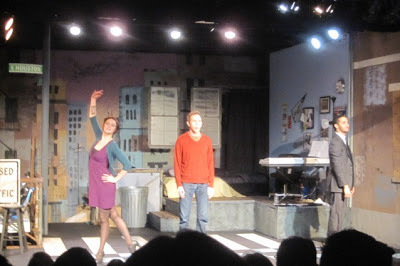 Running until March 3rd, there's still plenty of time to catch this one, showtimes are Fridays & Saturdays, 8 pm and Sunday 2 pm matinees, call for tickets at 505-254-7716 or visit their site online at www.auxdog.com.
Posted by Alissa Hall at 8:25 AM No comments:

Sometimes I see random things in my life, and they give me pause... I tend towards the fanciful. I see Art. A lot. 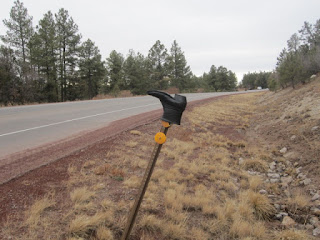 This was along the highway one morning. It made me remember a haiku I wrote about a year ago...

A manky old boot
Abandoned by the roadside...
Is it a portkey?

Tuesday night was a packed house at the North Fourth Arts center, can you tell? 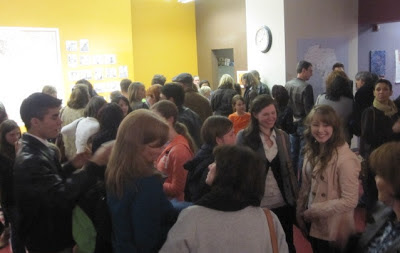 Jonathan Ragsdale, as a local dancer, performer, actor, singer, instructor and choreographer, has had plenty of chances to interact with the Albuquerque theater scene in the past few years, with companies and organizations like The Albuquerque Theatre Guild, PLAY Conservatory, Musical Theatre Southwest, and Albuquerque Little Theater. Naturally, the turnout for "GRATEFUL, a farewell cabaret" filled the entire house (and was even Skyped) so that colleagues, friends, and family could celebrate his achievements just weeks before his departure for the Big Apple, and bigger plans. 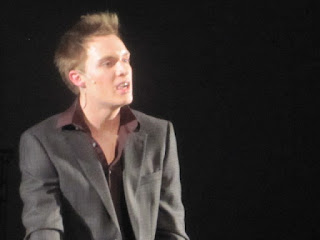 I spoke with Jonathan before the performance, "This show is everything I want to leave behind. The main message is a big thank you to all of the people who've helped me in this journey. It's not 'Hey look at me,' that's not what I want. It's to thank all those people who went crazy with me and played with me in the theater. I want to share my most honest thoughts, and all these special moments I've had. And to say thank you."

Accompanied on piano by Paul Roth, Jonathan's show included musical numbers that allowed him to narrate the show as well as highlight his singing and dancing talents. "On Broadway" opened the show (very Fosse, of course) with his student dancers (Katie Marshall, Callie McCarty, Mercedes Goodart, Samantha Rogers, Montana Sandoval and Belle Hernandez) accompanying him. 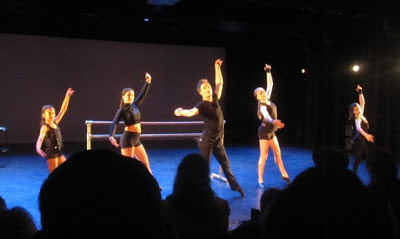 The girls returned to flesh out Jonathan's story of his early years in ballet class during "One Step Closer," and while most of his numbers were performed solo, such as "Come Down From the Tree" and "Grateful," one performance piece focused entirely on Jonathan's student, whose rendition of the "Cup Song" from Pitch Perfect really was pitch perfect.

I first met Jonathan Ragsdale during call backs for "Footloose" - Jonathan was reading for Ren that day - and later got to know him better while rehearsing and playing opposite him as his character's mother during the run of the show, produced by Musical Theatre Southwest. It's tremendous, for me as a performer, to see others who reach for their dreams, while having the courage to say goodbye to the life they've known thus far. Jonathan's cabaret was sentimental expressing this, but also upbeat.

A little Fosse, some time on the cabaret stool, a little ballet & musical theater, a lot of humor & smiles... and in the spirit of giving back to the community who nurtured him, all proceeds from the evening's event benefited The Growing Stage, where Jonathan has instructed in years past.
Posted by Alissa Hall at 12:11 PM No comments: