Stars of American Ballet at the Lensic

Good luck keeping up with Daniel Ulbricht, creator of the Stars of American Ballet, the company which appeared in two different programs this past weekend at Santa Fe in the Lensic Theatre. Let's start with the fact that Daniel's been a principal dancer at New York City Ballet since 2007, which might be enough aspirations for some dancers. But Daniel decided to form a touring company, with the intention of bringing ballet to many American locations, far and wide. By connecting with the Santa Fe Concert Association who funded the endeavor, Daniel was able to bring these works to our local audiences. 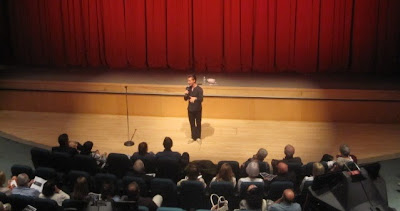 In true outreach fashion, his Saturday wasn't spent in a hot tub, recovering from the Friday night performance. Instead, he taught master class for intermediate and advanced dance students at the National Dance Institute that day, which the students attended for free due to SFCA's sponsorship. Then, it was back to the theatre, where Daniel gave a pre-performance discussion for the audience. With minutes to spare before curtain, he dashed backstage to perform in the two act program, and afterwards? When the curtain closed, Daniel stayed late to come out into the house, talk with fans and take photos... he's that gracious. 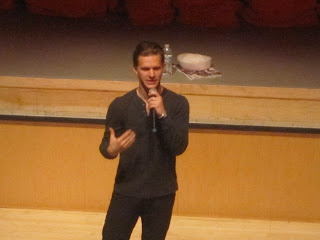 While talking to the audience before the show, Daniel spoke first about how the Stars of American Ballet came to be -- we can thank his mother as it turns out, thank you Mama Ulbricht -- and fielded questions as varied as, "How does the altitude affect you as a dancer?" (quite a bit, as we locals might guess) to "How do you cast your ballets?" The process of casting from several New York companies for the tour involved a lot of juggling schedules with his fellow dancers, as well as discussing which parts dancers were familiar with already, requiring less rehearsal time. Even the sailor's cap, a significant part of the men's Fancy Free costumes which comprised Act Two, was included in the talk as Daniel shared how the way each dancer wears his hat allows him to tell something about his character.

Different programs appeared for their Friday and Saturday evening performances, and Saturday's first act contained five different pieces, all short visions of what "ballet" can be. In his talk, Daniel discussed crafting a program that satisfies different audience members' expectations of "going to the ballet." In the first act, if you needed toe shoes and avante garde pointe technique, you got plenty of that in Liturgy. Choreographed for City Ballet by Christopher Wheeldon and performed by Rebecca Krohn (soloist, NYCB) and Jared Angle (principal, NYCB) you can practically see the Balanchine DNA in the shapes and weight bearing pas de deux that immediately brought Four Temperaments to my mind. As the dancers finish the dance in silence, the effect is indeed haunting.

If you needed a strong storyline, Lauren Lovette (corps, NYCB) and Robert Fairchild (principal, NYCB) in the Carousel pas de deux satisfied, with the conflict of the relationship coming through strongly. Daniel's own solo in Sunshine was one of my favorite surprises on the program, a delicious piece that was over just as I was craving much more. And for those needing a tutu moment to know they had been to the ballet, there was of course Giselle's romantic tutu in the pas de deux danced by Stella Abrera (soloist, American Ballet Theatre) and Sascha Radetsky (soloist, ABT). Rock Steady, a pas de cinq, finished off the first act on an upbeat note, with Tiler Peck (principal, NYCB) carrying a huge choreographic load and dancing nearly nonstop as the three males entered and left throughout the piece.

Fancy Free, presented in its entirety, comprised Act Two and relies not only on the dancers' ability to move, but to bring their characters to life through the story that is told. Relying on the age-old humor of the peculiarities of humans trying to impress each other, the sailors' trio (Robert Fairchild, Daniel Ulbricht, and Sascha Radetsky) interact with the female passers-by (Stella Abrera, Tiler Peck and Rebecca Krohn) and it's hard not to smile -- my cheeks hurt at times -- at what Jerome Robbins and Leonard Bernstein have left for us to enjoy. 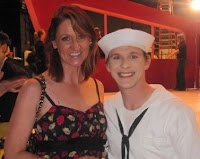 It's difficult not to fall into superlatives when trying to capture the dancers' artistry in every piece presented. For a balletomane such as myself, to compare soloists & principals from our country's greatest ballet companies is like comparing brownies... they are all so good you can only gush over how much you loved it, and how you wanted more. Lucky for me, when all was said and done Daniel was kind enough to take one more photo... it was the cherry on top of a delicious evening of dance.

For future Santa Fe Concert Association events, you can visit their website at www.santafeconcerts.org.
Posted by Alissa Hall at 8:14 AM