The plight of the entitled Hedda Gabler, a role considered by some to be so complex it's been called a female version of Hamlet, is a difficult space to occupy onstage. She is neither particularly heart warming, nor endearing, and yet the pressures of her world must become related in some modern way. The version currently playing at the Aux Dog Theatre is an adaptation of Henrik Ibsen's original work, done by Brian Friel, and echoes the original just enough while allowing the characters to remain current. 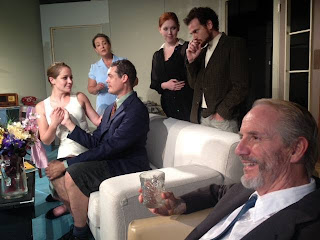 Set in 1962, in WASP-y Massachusetts, Hedda's struggle as a misunderstood housewife echoes the social restrictions of that pre-hippie era, as well as silently pointing to current issues facing women today, reminding the audience of what has and has not changed. The lead role, played by Sheridan Kay Johnson, is a tightrope of bitchiness, cruelty and disdain, tinged with boredom and frustration. Standing in doorways, she often finds herself unable to cross that threshold into the next great thing she imagines for herself, and for her husband, the coolly cerebral academic, George Tesman, played by Brennan Foster. George,"the anchor,"  is no match to Hedda's manipulations, but must give the impression of authority and competence if he is to advance in his professorship, and meet the demands that Hedda, and that society at large, places upon him.

Click HERE to listen to Sheridan, Brennan & Jessica talk about the show 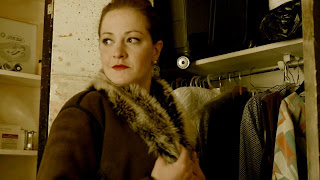 Ambivalent to her expected motherhood, others' ebullience on the issue only needles Hedda as she watches the personal triangles around her, and those of her own making as well, stewing. When Hedda confronts Thea Elvsted, who continually seems to inspire men to their own great destinies, she finds the root of her own demon... although fearful of scandal, Hedda's need to act upon her darker impulses keeps bubbling up. Evening Star Barron finds Thea's quirky charms to play up and only sharpens Hedda's claws with her own innocence. As Hedda's choices begin to dwindle once her grasps for power become compromised, her ultimate choice becomes clear to her, building the show to a highly climactic ending. 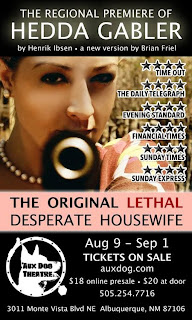 Directed by Jessica Osbourne, the production marks her directorial debut at the Aux Dog, and the cast as a whole functions at times like cogs in the wheel, each another piece of the puzzle that is Hedda. As George's foil, the bohemian Eilert Loevberg, played quite convincingly by Ron Weisberg, is everything that George is not... reckless, passionate, self-destructive. Perhaps the only match to Hedda's wit comes from Judge Brack, played by Daniel Caimi, and is one of the few characters to face Hedda's barbs with a sense of indulgence rather than fear.

Playing with firearms, as well as with reality and perceptions, the show is at times funny and at others bitterly cruel, ascerbic and yet still palatable. For tickets and information online, visit www.auxdog.com or call 505-254-7716. This theatre is intimate and although tickets are available at the door, advance reservations are always recommended. The show is playing until September 1 so get to it. Hashtag for the show? #Jumbo
Posted by Alissa Hall at 2:00 PM