Fiddler on the Roof by Landmark Musicals at Rodey Hall

Celebrating the 50th anniversary of the show and raising the roof with cheers, "Fiddler on the Roof" by Landmark Musicals premiered to an appreciative house at Rodey Hall on UNM campus, auspiciously opening on the night of Purim (a festive Jewish holiday) and playing until March 30th. Directed and choreographed by Gary John La Rosa, the atmosphere for the show began before the actors' appearance with the magnificent Marc Chagall-inspired curtain, featuring "The Fiddler," from which the musical takes inspiration for its name and masterfully created by the company's production designer, Dahl Delu. 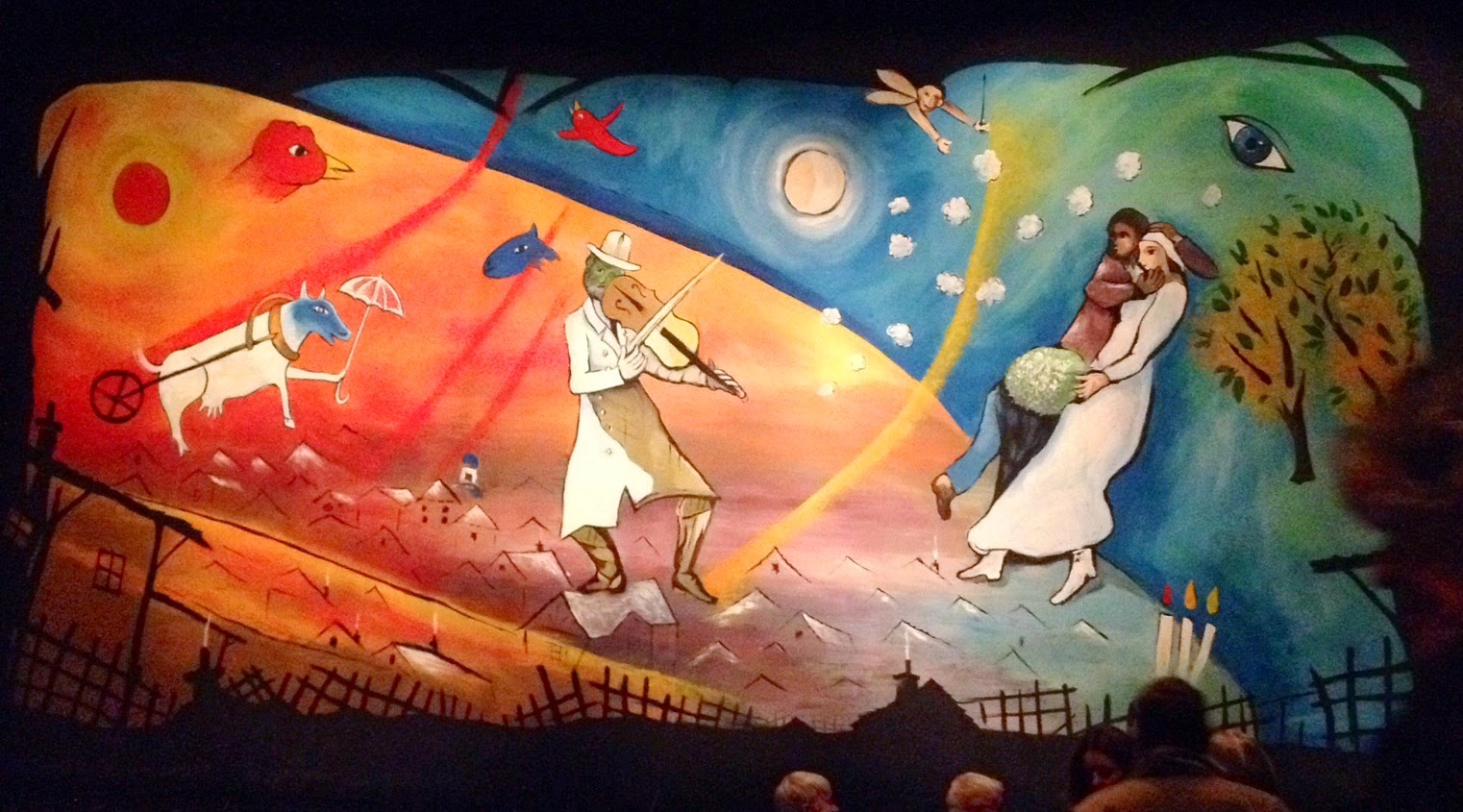 Central to the plot, Michael Finnegan magnificently embodies the patriarch Tevye, a man who dreams big and lives humbly as a part of the Jewish community, Anatevka. As any good and devout Russian, he lives his life by "Tradition," the village's rousing opening act, but we also see that he is a dreamer as well, in his memorable solo, "If I Were A Rich Man." Balancing his bravado is his wife Golde, who rules at times with an iron fist. Played by Lorri Oliver who brings a tremendously strong voice and character to the role, Golde gives solid ground to the dreamer she is married to, and the backbone needed to discipline their five girls: Tzeitel (Elise Mouchet), Hodel (Daniela Deuel), Chava (Adrianna Deuel), Shprintze (Cristina Deuel) and Bielke (Riley Martin).

Click HERE to listen to Lorri, Daniela and Julian talking about the show

The dilemma of how to best marry off his progeny begins as we see the girls dreaming of love in "Matchmaker," with clever choreography catching their skidding mops. More inventive choreography was rousingly met in the "Bottle Dance," near the end of act one. Matthew Amend, Zane Barker, Justin Ray Cordova, and Luke Loffelmacher give a hair raising performance as we watch the bottles teeter (no tricks! no gimmicks!) and yet triumphantly remain atop the dancers' heads.

The plot revolves around the dynamics between the young couples, as the revolutionary and contrary ideas of the young begin to supersede the elder's established ways. Tzeitel and Motel (Max Woltman) break with the tradition of an arranged marriage, choosing their love to each other. Woltman's gentle tailor gave the audience plenty of laughs, especially when playing against Finnegan, endearing the young couple as they fight for their love.


The bookish Hodel and Perchik, the forward-thinking student from Kiev (Julian Singer Corbin), press tradition even further as they too arrange their intention to marry. Tevye, with much pondering where he breaks the fourth wall and charmingly addresses us even as he is addressing himself, eventually gives his blessing. But it is young Chava and Fyedka (Harrison Wirstrom) who bring an even greater challenge for Tevye to reconcile, even as his world changes for good.


The beliefs and customs of a Jewish rural community under the Tsar are integral to understanding the show. In "The Dream" sequence, we see how the superstitions of the people are intermingled in their decisions, with special mention to Wendy Barker who gives a wonderful performance as the ghost of Fruma Sarah, Lazar's late wife, and catching the audience up in the supernatural fun. Throughout both acts the company's mutually strong vocal performance, overseen by musical director Andrew Alegria, was as consistent together as it is in their solos and duets. Two additional strong characters who shine in this show include Lazar (Vernon Reza) and Yente (Kathy Mille Wimmer), both delighting the audience in their moments as well.

With live music to enjoy, this production meets the high standards Landmark Musicals is known for, and delivers an evening of heartfelt fun for all. To get tickets in advance, visit www.unmtickets.com or call the box office at 505.925.5858. And for more information about Landmark's season, you can visit the company's website at www.landmarkmusicals.org.
Posted by Alissa Hall at 3:45 PM