A dynamic partnership can bring new life to art, most certainly. And, when the Figueroa Music & Arts Project teamed with Festival Ballet Albuquerque to present their joint venture, "The Firebird & Tchaikovsky," new life was given to a beautiful company duet composed of so many talented local artists. 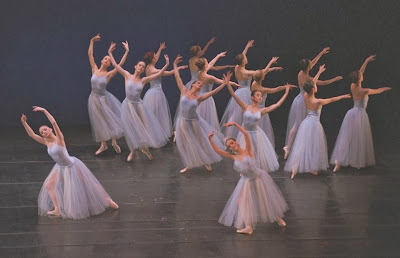 Figeuroa Project director Guillermo Figueroa spoke directly to the audience throughout the show, sharing his knowledge while introducing each piece. The first half of the program, presented at the National Hispanic Cultural Center, began with Insula Tropical, a series of pieces for violin and strings based off Caribbean folk music and written by Ernesto Cordero. Next on the program was the classic Serenade for Strings by Piotr Tchaikovsky, and featuring the first five minutes of George Balanchine's iconic Serenade choreography (the first ballet to be choreographed on American soil), danced by the members of Patricia Dickinson Wells' Festival Ballet Albuquerque. 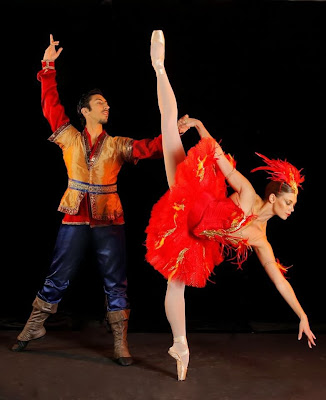 Igor Stravinsky's "The Firebird" comprised the second half of the program, based on the Russian folk tale about a prince who is captivated by the magical creature, only to release her with her promise symbolized in the red feather she leaves behind to keep. Dancing the lead role, Natalee Maxwell brought her technical proficiency to the character while continually developing the mystic character's story line. Breath taking in her extensions and lines, the fluidity of her port de bras juxtaposed by the angular positions of her hands, as well as Maxwell's choice to give the Firebird quirky, bird-like movements, clearly set her apart from all of the humans onstage during this tale.

Featuring the choreography of Patricia Dickinson Wells, the purity of the original choreography by Fokine was honored in many of her choices, not the least of which is to keep the traditional pantomime sections in. Although antiquated audiences "read" these moves with ease, modern audience members such as myself still look for these classic moments, which I was happy to see included. However, shades of Balanchine's 1945 version of "The Firebird" could also be discerned by the balletomanes, making Dickinson's vision both classic and modern, yet uniquely an expression of her own. 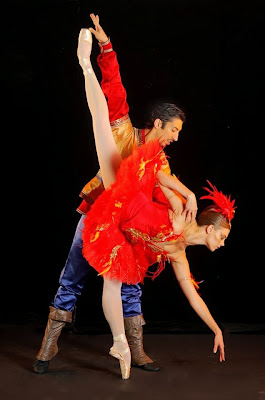 As the prince Ivan, Dominic Guerra has the duty of partnering both the Firebird as well as the Princess, danced by Ludmila Malakhov, who is the Prince's object of love and desire. Though physically demanding, the work to create these moments of sustained airiness in each of the pas de deuxs never showed as the soloists aptly held up to the demands of the technique, allowing the storytelling to shine through. Guerra's smooth transitions and moments of discovery betray the artistic approach he takes to his dancing, allowing his mastery of technique to sustain him throughout. Malakhov's ability to bring the innocence, and yet the passion to fight and defend the prince and her subjects from the evil in their land, comes through in the choices she gave to her character. An artist as well, she tells tales in her smaller, subtler movements as easily as the large ones.

Juxtaposed against Dickinson Wells' classical ballet moments such as the pas de deuxs are the awkward shapes and angular movements of the gargoyles' dance, the minions of the evil King Katschei who keeps the Princesses under his spell until the Firebird intervenes. Louis Giannini gave himself fully to the villain's role, playing his character part with enthusiastic wickedness.

Coming up next for Festival Ballet Albuquerque is their "Nutcracker In the Land of Enchantment," also playing at the National Hispanic Cultural Center from December 20-22, and for those who wish to partake in the dynamic duo of FBA and the Figueroa Project, don't miss their next collaboration, a gala event titled, "New Year's Eve in Vienna," taking place on December 31 (naturally), also at the same venue. For more information about their company, visit their website at www.festivalballetabq.org to buy tickets or learn more about their company and classes.

Additional information about Guillermo Figueroa and the Figueroa Music & Arts Project can be found at www.figueroaproject.org.
Posted by Alissa Hall at 3:06 PM