Gather round, children, while Alissa tells you a tale of what air travel used to be. There were no TSA agents and you kept your shoes on, because flying was a glamorous activity and the stewardesses whose job it was to keep you comfortable while in the air were the sex symbols of their time. Synonymous with feminine appeal, a single stewardess was considered a coup for a man, so imagine having three? Boeing Boeing, a comedy of errors currently playing at the Aux Dog Theatre, gives us a glimpse into one man's fantasy life, setting this precarious situation comedy up so we can watch things as they inevitably fall apart. With each fiancee from a different country, working for a different airline and always in motion, Bernard believes he really can have it all (with a little extra help from his maid, Berthe), as long as his life runs as smoothly as the aviation time tables that he relies upon. 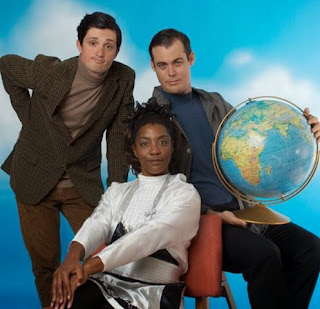 But of course, it's a French farce so the three fiancees converge upon their mutual Paris flat, disrupting the coordinated life of Bernard, played by Brennan Foster, and making room for his friend Robert to observe, and later interact with, Bernard's female complications. Foster's comic presence is often understated, and more believable because of the restraint, lending the broader strokes in this slapstick comedy an understated sense of credulity.

Directed by Victoria Liberatori, Aux Dog's Artistic Director, the giggles turn into guffaws as we witness Bernard struggle to manage the women in his life, but equally interesting are the individual personas of his fiancees. Gloria, his American fiancee working for TWA, is played by Sheridan Johnson as the bubbly personality whose enthusiasm for Bernard, her lover in France, is as exotic to her tastes as the flavors of the foods she eats.

Click HERE to listen to Merritt, Matt and Angela discuss their roles in the show 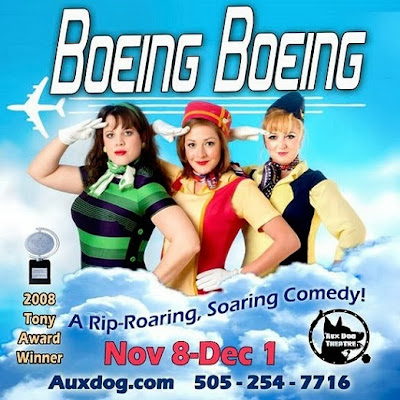 Gabriella, the Air Italia stewardess played by Merritt Glover, is luscious and temperamental, and ultimately the one who compels Bernard the most. Finding a balance between her vocal inflections and her physicality, Glover gives us plenty of sauce to Gabriella's gravy.

His third fiancee is Gretchen (played by Jessica Osbourne), from Germany's Air Lufthansa, who is conflicted between her love for Bernard and her burgeoning attraction for his friend Robert, played by Matt Pruett. Fearless in her approach to Gretchen's conflicted decisions and her extreme, German emotionalism, Osbourne finds a variety of emotional levels and dimensions to her character, making the twists of her character's fate more believable as well.

The only woman Bernard isn't sleeping with (that we know of) is Berthe, his "domestic servant," played by Angela Littleton. Well aware of her employer's shenanigans, Littleton's Berthe is the reluctant accomplice with an arsenal of verbal barbs that she handles as gracefully as she does his antics. As Bernard's friend Robert, Pruett brings out his character's transformation, taking him from a wide eyed, Wisconsin innocent into a more worldly and sophisticated man, such as his continental friend, all while learning how to manage the expectations of a woman. Pruett's facial expressions and comic delivery are reminiscent of Jim Carrey at times, with a commitment to the physical humor that requires a touch of inner daredevil.

If you're ready for your boarding pass, book your trip by getting tickets at their website www.auxdog.com or by calling their box office at 505.254.7716 and climb aboard their flight full of frivolous fun.