A Christmas classic, "Miracle on 34th Street," is a seasonal treat for audiences at the Albuquerque Little Theatre. Adapted from the novel by Valentine Davies, this story has been playing on our television sets as the 1947 film version for years, but seeing it live has a different pace, and keeps the show new, while maintaining the familiar for the nostalgic ones in the audience. 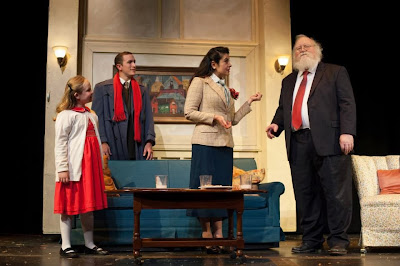 John DuBois plays Kris Kringle, the man who believes he's Santa Claus. Witnessing a drunken Santa interacting with kids at the Macy's parade, Kris steps in and insists he should play Santa since he is Santa. Diane Villegas brings the skeptical Doris Walker to life, a female executive at Macy's, and a single mother in a time when divorced single mothers didn't exist in normal society. Suspicious of Kris, her opinions are torn between those of the psychologists and counselors, and those she loves who believe in Kris, such as her daughter Susan (played adorably by Elise Klinger in the role movie buffs recall belonged to young Natalie Wood). But it is Kris whom Susan confides in, wishing for "a father, and a house" for Christmas.

Click HERE for John, Diane and Nick's interview as they talk about the show 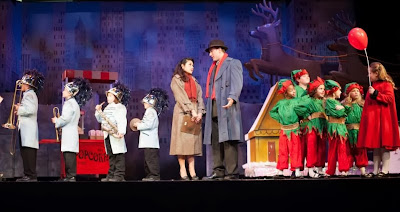 Doris' jaded heart is the object of Fred Gayley's affection, played by Nick Fleming, who seeks to woo Doris without scaring her off. Fred insists Doris is afraid, but she argues it's common sense, not fear, that anchors her beliefs. As the debate grows over whether Kris is the real Santa or not, the issue is settled in court, much the same as the classic film version's tale. When Judge Harper (Hugh Witemeyer) is presented with irrefutable evidence, the verdict we all hoped for is given. 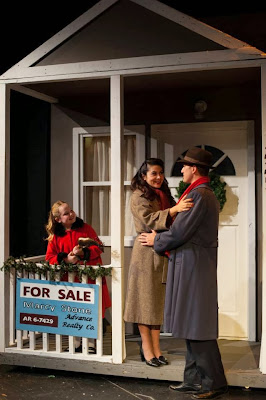 The underlying message of the play is the exploration of faith, "believing in something when common sense tells you not to," and for Doris, she must learn to believe in love and second chances, as much as she does in Kris Kringle. Giving the show some comic counterpoint is Dehron Foster's role as the psychologist Leslie Sawyer, tipping the levity with laughter in his moments onstage. A perfect choice for a show to introduce young kids to theater, with many children onstage to watch as well, the play is heart warming and full of the messages of the holiday season.

Directed by Henry Avery, the story flows nicely in and out of interiors and exteriors thanks to the set design, and kudos to the construction crew not only for some sharp looking sets, but most especially for the wow factor of the Macy's parade float.

To catch this seasonal classic, head to Albuquerque Little Theatre, located near Old Town, or visit their website at www.albuquerquelittletheatre.org to purchase tickets, find out showtimes, and much more about the rest of their 2013-14 season.