Invaders of the Heart:Revival by Mosaic Dance Company

This past weekend "Invaders of the Heart: Revival," a belly dance showcase of the Pomegranate Studio's three companies, delighted many within the intimate setting of the Maria Benitz Cabaret at the Lodge of Santa Fe. As the studio's founder, primary choreographer, costume designer and artistic director, Myra Krien brings her unique vision of belly dance to the stage in a grand fashion each Spring, coincidentally in the same place this year where the company first performed in 1998, over 15 years ago. 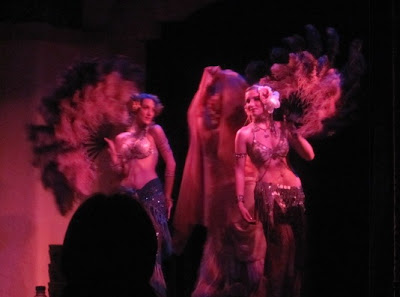 The "Revival" program featured traditional Oriental choreography, as well as American tribal style and flamenco fusion pieces, and Krien's Belly Baile style, her own creation. A dazzling smatter of props added to the show, including not only traditional veilwork, but also Burlesque-style fluffy feather fans, and Asian veiled fans which made a delightful dragon effect in the number, "Geisha's Tears." Solo numbers and ensemble pieces comprised the two sets, with moments of humor, and personal expression, interspersed.

The special guest performer this year was award-winning dancer, filmmaker and graphic artist Cecilia Rinn, who not only performed, and taught workshops during her visit, but also held a special screening of her film, "Belly," a documentary that explores family, body image, sisterhood, female empowerment and spirituality through the medium of belly dance. 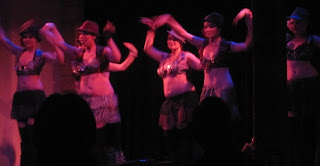 Jade McLellan's performances were particularly strong this year, an artist who has developed on stage for us to watch since 2006. Now the Acting Director for their apprentice company, her own solo numbers were powerful in characterization as well as technical ability. The program notes Jade is moving on, and it was a joy to witness her artistry once more before her possible Pomegranate Studio departure.

Creative costuming is second nature to Krien, whose design skills are put to use creating her clothing line, as well as her creative expressions onstage. This year, cute fedoras and pantaloons adorned the gypsies, while other more traditional costumes were seen, and flamenco accents within the second act allowed greater characterization for the dancers to express themselves with. 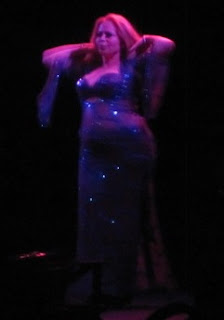 Local dancers may wish to attend Krien's upcoming workshop, on May 19 at Farfesha's in Albuquerque, and her upcoming performances can be seen in Santa Barbara, Ca. as well as Maui, Hi. This summer, she will be starting her current session of her SEEDs Teacher Training program. SEEDs was originally developed as a way to nurture and educate young women in a positive fashion, using belly dance as well as other means of self expression and empowerment, a model which now has 14 other programs nationwide based on the same model. Unique to this year, Krien will also be offering her first Sophia workshop, a four-day retreat in July based on the SEEDs program but designed for women. For more information about Pomegranate Studio, visit www.pomegranatestudio.org or email pomegranatesfnm@yahoo.com.