The beautiful mind of the mad man is Landmark Musicals' focus in "Man of La Mancha," the final show of their 2013 season. The show's layers of story telling are slowly revealed to the audience, allowing us to see the illusionary Don Quixote through the eyes of his alter ego, Alonso Quijana, as told by Miguel de Cervantes, who is thrown in prison, along with his manservant, for foreclosing upon a castle and awaits questioning by the Inquisition.

Described as "either the wisest mad man, or the maddest wise man," when Jack Nuzum embodies Don Quixote's persona, he is swept away by his own grandiose delusions, convincing all around him to either humor him and play along, or to scoff at his madness. Nuzum's ability to sink into each layer of his character, from Don Cervantes to Don Quixote is found in the shaping of his words and the carriage of his body, simply becoming each one alternatively. A strong tenor, his voice lives up to the challenge of Quixote and delivers the sound that longtime fans hope to hear. 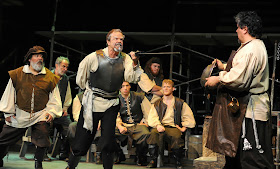 Consistent in his care, despite his master's madness, is the jocose Sancho Panza, who explains away every eccentricity by remarking, "Knights have a language of their own." Played by Vernon Reza, he acts more as caretaker to his master's delusions, finding the nurturing side of this character, who could become sarcastic or sardonic in the hands of the wrong actor. Instead, Reza allows the audience to identify with Don Quixote by acting as that voice of love and reason to the visions of greatness he cannot see, but pretends to.

Cast by Don Quixote as Dulcinea, the ultimate female to whom every quest is dedicated, is local tavern wench Aldonza, whose attitude toward men and love has long since gone sour, as we see in, "It's All the Same." Tasha Waters finds Aldonza's jaded heart easily, but alternatively softens to Don Quixote's delusions, and regrets her own bitter reality. Abused grievously, she represents the harsh reality that Don Quixote's romantic notions cannot begin to fathom. Waters' operatic training shines through in the role, giving her Aldonza a larger than life quality that elevates her to the level which Quixote sees in her.

Click HERE to listen to Jack, Tasha, and Vernon discuss their roles

Giving counterpoint to the show was Bryan Daniels, as the Duke and Carrasco, showing Albuquerque yet again that he is becoming known for his character voices. Exceptional at keeping an accent while never losing focus in the moment, Daniels gives some menace to the production, perhaps even more so than the figure of the Inquisition itself, the Captain.

Landmark Musicals' producer Myra Cochnar describes the company's goals of bringing high production values and live music to each show, and director Paul Ford uses the home of Rodey Theatre to the musical's ultimate advantage by sinking the musicians into the orchestra pit, and allowing the pit itself to become an alternative entrance, integrated at times into the story itself. It's been done before, but it never ceases to delight me, I admit.

The sound of this show was far more operatic than a traditional musical might demand, and music director Wojciech Milewski aptly blends the Spanish elements of this score into the vocals as well. With a strong ensemble cast, the sound was full and as epic as the bombastic quests of the mad man himself; songs such as "We're Only Thinking of Him," and "Little Bird, Little Bird," showing off their "mad harmonic skills." And as proof there are no small roles, only small actors, was my favorite muleteer, Alex Wasson. His gently authentic expressions as Sancho's mule -- at times an extension of his own master's emotions, much the same as Panza extends the emotions of his own master, Quixote -- were so precious, they kept me smiling continually in this show.

For more information about their upcoming 2014 Landmark at the Rodey Season, visit their website at www.landmarkmusicals.org or give them a call at (505) 453-8844.
Alissa Hall at 1:45 PM
Share