Into the Woods by Musical Theatre Southwest

In literature, the forested woods can symbolize a place of unknown possibility (like theatre!), both frightening and tantalizing, and sure to test your character. Venturing fearlessly into the unknown, Musical Theatre Southwest presents "Into the Woods," the musical written by Stephen Sondheim and playing at their Center for the Arts Black Box until April 27. Written with gentle humor, the story plays as equally charming to adults, so don't assume fairy tales are only for children. In fact, many moments in the show reckon to more mature emotions, including romantic love, a parent's love for their child, and the desire to protect those we love from the evils of the world. 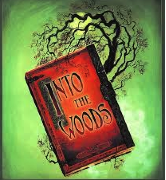 The story revolves primarily around the Baker (Jonathan Dunski) and his Wife (Erin Warden), who venture into the woods to remove the Witch's curse of childlessness. In their effort, they meet Cinderella and her evil Stepmother, Little Red and the Big Bad Wolf, a couple of Princes and many more storybook characters. But, "careful the wish you make. Wishes are children. Careful the path they take." Dunski and Warden's chemistry with each other is compelling throughout the show, while each perform equally as strong in their solo moments, both bringing their own personalities to infuse these lead roles with.

Tahirih Garcia plays Cinderella, who is often running from her destiny, but finds that when her choices catch up with her, she must decide for herself the path to happiness. Garcia creates a more emotionally believable woman from the fairy tale princess we already know, all while juggling the attentions of one of the show's two Princes (played by Aaron and David Aubrey), who have great moments in the show in their own right. The delightfully tongue-in-cheek duet "Agony" brought chuckles from the audience, spoofing the twos' besotted foolishness.

Click HERE to listen to Jonathan, Erin and Tahirih as they talk about the show 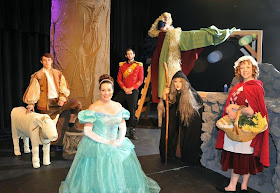 Derrick Medrano, as Jack, brings another dimension to the story, that of the innocent, and performs beautifully in his memorable moment, "Giants in the Sky." Fairy tales are built from the structure of what we universally share, and youthfulness and innocence we can all relate to, as well as other themes, such as the challenges of parenthood. Beth Elliot makes her company debut quite charmingly as Jack's Mother, while Tasha Waters brings an emotional depth to the Witch, giving her many more dimensions than the archetypal villain. Her two solos, "Stay With Me," and "Witch's Lament," express her desire to keep her daughter Rapunzel safe, and they tore me open with the kind of heart wrenching, strong emotions that come from watching fearless actors at work.

Not to be forgotten is another enchanting debut, Jessica Quindlen as the engenue Little Red. Perky and relentlessly upbeat, it takes the maturity of the second act for Little Red, Cinderella, and Jack to realize they are all orphans of one sort or another, and that the sadness which ties them together also reminds us, "No One is Alone." As the Baker tells Little Red, "Mother said to never stray from the path, but the path strayed from you." How metaphorically true that is for so many of us, to set a path in life only to find ourselves to have strayed far from it, and into something strange, and altogether new and unexpected. 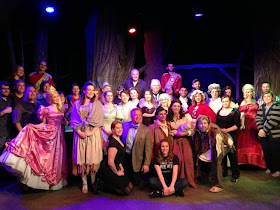 With live music to be enjoyed, the show is a great way to introduce children to musical theatre, but you only have to be a kid at heart to want to see it too. With limited seating, advance tickets are very much recommended -- opening weekend was already completely sold out -- so visit their website at www.musicaltheatresw.com or call their box office at (505) 265-9119 to book ahead and settle in to this show's journey on your own. There were standing ovations on opening night, so you may even find yourself jumping out of your chair before it's all over.
Alissa Hall at 7:17 AM
Share